Where should your Cannabis related investments go in 2018?

Marijuana Is the New Gold for Mining Companies Going to Pot

“While the company has no revenue, it’s valued at C$612 million ($467 million) and became a takeover target itself by rival producer CanniMed Therapeutics Inc. in November.” (Before I begin, I strongly advise that everyone invests heavily in CanniMed. It’s going to look like you bought Google Stock when it hits peak market evaluation. It was trading at $36.23 when I wrote this).

So this Canadian medical grow firm is worth $467 with no revenue whatsoever. Sounds like the time is ripe to invest in MJ grows in Colorado, right?

As Lee Corso would say “Not so fast my friend.” While they call it weed, Marijuana is actually a difficult plant to grow. The average businessman that thinks he is going to procure a license and hit the ground running is in for a very sad day at the office. Colorado’s dry climate with low oxygen is not a great environment for any sort of agriculture, and it can be particularly difficult for a plant that requires high humidity and oxygen for growth such as Cannabis. But let’s presume that you hire a competent master grower, you are well capitalized, you’ve done your research into strains that you want to grow, you have a sales force in place, is cultivation where it’s at?

Annoyingly, I will give you the lawyer answer of “it depends.” Irritatingly, Colorado’s Marijuana Enforcement Division (MED) will not release detailed sales information related to marijuana, and may not even collect the kind of data points useful to make a determination as to where your money should be spend. The only numbers that the MED releases are generic figures related to bulk Cannabis sales. This will give you an inflated sense of what Cannabis sells for on average, as its a pure average number, and not the median. Therefore, the absolutely abominable schwag that’s coming out of Pueblo County that I would not let my enemies smoke is being averaged in with the finest endo from Denver. That’s not to say that there isn’t indoor dank coming from Pueblo County that’s delightful, it’s just that the outdoor product flooding the market at $999/lb or less is eating away at the profit margins of an industry that once boasted wholesale prices north of $2,000/lb. 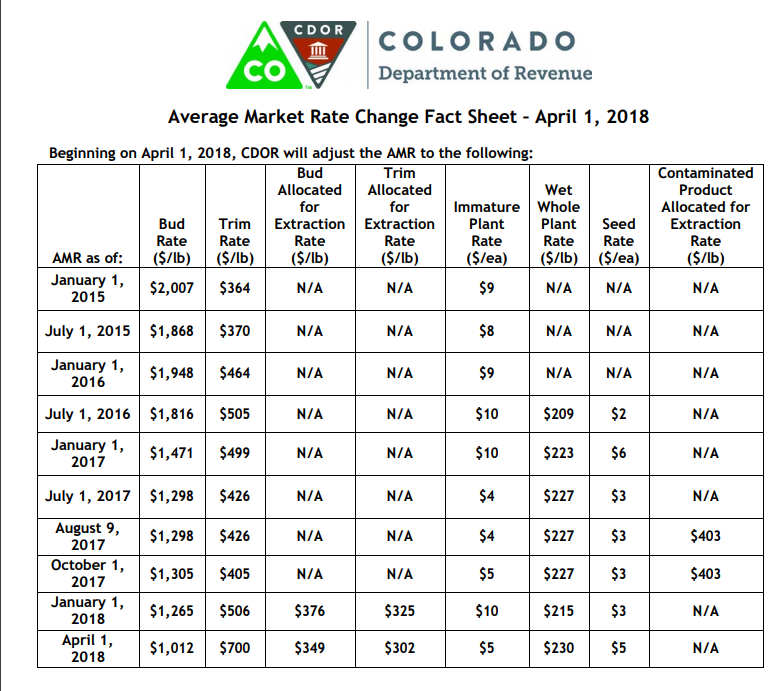 Look at that beautiful bean footage – except it’s pure and total shit. In which ways is this shit?:

I do not represent any of the large scale greenhouse growers in Pueblo County who are selling near the AMR, so I can safely say that I have no clients who are not selling wholesale retail pounds at anything less than 20% greater than AMR. So all is not lost if being in the business of cultivation is what you dream. As AMR has gone down, growing techniques have improved and we’re seeing per pound costs down below $500, whereas four to five years ago we were looking at prices around $700 per pound.

The rate for trim has skyrocketed as new avenues for growth have arisen in infused products manufacturing though, and that means that if you’re leaving your trim in any sort of shape to be sold, you could be looking at a net profit of over $1000/lb. The question is whether you can streamline production to make that kind of profit – and what your numbers are on your financing. We will cover lending procedures as they relate to marijuana in another article – but if you can get a sub 10% note, it’s probably worth taking on the debt. If its your own money, there are probably more productive markets in Colorado for your investment.

Do I think Colorado is headed for a $400,000,000 company? Probably not. The market here was first in the country to recreational marijuana, Colorado consumers are savvy, and the competition is already so established it would be difficult to see the kind of market structure that lead to that kind of valuation. $250,000,000 is a more likely valuation if the market sees some consolidation in the next few years with decreasing wholesale pricing.

The bottom line: A smart business plan, developed with a lawyer who has experience in obtaining hard money loans, can save you from making mistakes in the process and get you in this growing (LOLOLOLOL kill me) industry.

Red Law is a full service marijuana litigation law firm located in Denver, Colorado. We represent small and large businesses in litigation, as well as business representation. We also represent criminal defendants accused in federal and state courts related to marijuana and other substance abuse charges.